Yesterday I said that I would be posting an herb/spice a day. What better day to start than the first day of a new month.

So, February 1st is… 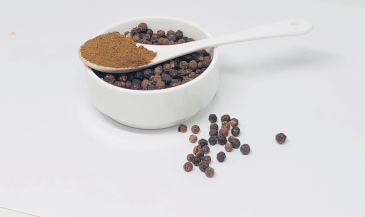 History/Region of Origin:  Christopher Columbus discovered Allspice in the Caribbean.

Uses: one of the most important ingredients of Caribbean cuisine. It is used in Caribbean jerk seasoning, in moles, and in pickling; it is also an ingredient in commercial sausage preparations and curry powders.

Directions
With an electric mixer, beat the butter with the brown sugar until mixture is light and fluffy (about 2-3 minutes). Add the ground cinnamon and beat to incorporate.

Add the flour and salt to the mixing bowl, and mix on low speed until the dough just begins to come together, being careful not to over-mix. If the dough is crumbly, use your clean, bare hand to gently knead it until it comes together. Transfer the dough from the mixing bowl to a large piece of waxed paper.

Use a rolling pin to roll the dough out into a 9″ x 10-1/2″ rectangle. The dough should be consistently about 1/4″ thick. Place another sheet of waxed paper on top of the dough, and wrap the wax-papered cookie dough in plastic wrap, or place in a large ziploc-type plastic bag.

Chill the dough in the refrigerator for at least one hour.

Preheat the oven to 300°F and line two rimmed baking sheets with parchment paper. Use a cookie cutter to cut out shapes from the dough, and transfer them gently to the parchment-lined baking sheets.

Sprinkle cookies with the Cinnamon Sugar and bake for 18-20 minutes, until shortbread are just lightly golden, but not yet browned around the edges.

Remove baking sheets from oven. Allow shortbread to cool 1-2 minutes before transferring to wire cooling racks, and allowing the cookies to cool completely before serving.

My name is Anna Hattauer and I love to cook. I am a personal chef living in Maryland. I grew up in California, joined the United States Army right after high school, got married, raised three children while going to college and working full time. As a young military wife and mother, we didn't have the money to go out to eat on a regular basis and had to make each pay check stretch. I learned how to prepare meals that were delicious, while staying within budget. While working full-time in the corporate world with the usual 2-3 hour I-270 commute, coupled with school & sports events, scouts and taking care of three children, it was tough to find the time or the energy to come home and prepare healthy meals for my family. Being a military family, we have traveled to many places around the world. I love trying new foods, the challenge of cooking new recipes and having friends over for dinner as well as cooking for special events. After cooking for my friends and family for over 25 years, I decided that I wanted to share my love of food and make people happy, so I dropped the corporate chaos and attended a formal culinary school and became a certified personal chef. I am a member of the United States Personal Chef Association and I am licensed, insured and ServSafe certified. View more posts